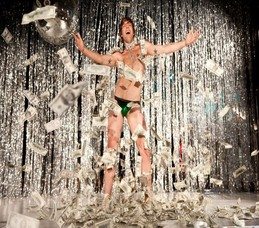 In Friday’s Best of the Bond Market we joined @cr3dit in calling out Doug Kass on his short position in US Treasury Bond ETF’s.

Although the TLT was slightly higher again today (and therefore further against Kass’ trades) the below tweet and his quote on Barron’s.com today show that he has not lost conviction in the trade.  If you want Doug’s full bond market bear argument here it is from his blog.  If you want an opposite view see our article on 5 reasons why the bond market bears are wrong.

We know from Doug’s reply to us on Friday that the average price where he is short the TLT from is 117.

WSJ: How to Play the Bond Market Now – To get the best balance of risk and return, the answer may be mixing various types of taxable and municipal bonds for maximum diversification. Most bond professionals believe rates are going to climb eventually. But “trying to anticipate rates has been a losing game,”

Index Universe – Are High Yield Bond ETF’s Misunderstood? – Some investors look at the size of the flows into high yield ETFs and expect to observe pressure on both fund prices and the underlying bonds themselves. If everyone buys something then its price should go up, right? Despite their growth, ETFs are still a small part of the high yield market. As of a month ago there was US$29 billion invested in US high yield ETFs. That’s less than 3 percent of the US$1 trillion US high yield market.

MorningStar: Need Bonds Now? 4 Tips to Keep from Getting Pinched

AJC.com: Wes Moss: Take more risk to beat low interest rates – The only way to boost the “yield” from your portfolio is to take on additional risk by investing in “spread products” — bonds considered riskier than Treasuries and accordingly pay a higher yield.  These include municipal, international and U.S. corporate bonds.

JLN Interest Rates: MSRB Establishes New Protections For State And Local Governments That Issue Bonds – The Municipal Securities Rulemaking Board (MSRB) announced today that, beginning in August, underwriters of municipal securities will be required to disclose to their state and local government clients risks about complex financial transactions, potential conflicts of interest, and compensation received from third-party providers of derivatives and investments, among other new requirements. Good summary of the full details included in the article.

Businessweek: Mortgages Beat Corporates With Fed Q3 Discounted – When compared with similar-duration Treasuries, returns on the home-loan securities are exceeding U.S. investment-grade company bonds by 11 basis points since March, partly because a Fed purchase program for mortgages is limiting a decline in demand as low yields deter some investors.

Bloomberg: Buffett Says US Banks Have Liquidity Coming out of their Ears – (h/t @counterparties) Buffett has $20 Billion invested in US Banks: “I would put European banks and American banks in two very different categories….The American banking system is in fine shape. The European system was gasping for air a few months back” until getting assistance from the European Central Bank.

Barrons: Junk Bond Yields Match All Time Low 6.95% – This comes as the average risk premium – the difference between yields on junk bonds and those of comparable Treasuries – remains at 5.94 percentage points, about a full percentage point above its historical average, meaning Treasury yields are the main culprit for such low all-in yields.

Investment News: Stage Set for Rally in Municipal Bonds – RBC Capital Markets projects that municipalities will return approximately $140 billion to muni bond holders through distributions and return of principal over the next four months, while issuing only $120 billion in new bonds, leaving a $20 billion reinvestment gap, which it called a “dramatic supply/demand mismatch” in a research note issued last week.

Reuters: Old feud appears to sink Obama’s Fed nominees – “I refuse to provide Chairman Bernanke with two more rubber stamps who approve of the Fed’s activist policies,” Vitter said when asked if he planned to lift his hold on the nominations.

Bloomberg: State-Local Governments Proving Market Doubts Wrong – Twenty-one issuers have defaulted for the first time this year, compared with 29 in the same stretch of 2011, according to Municipal Market Advisors in Concord, Massachusetts. 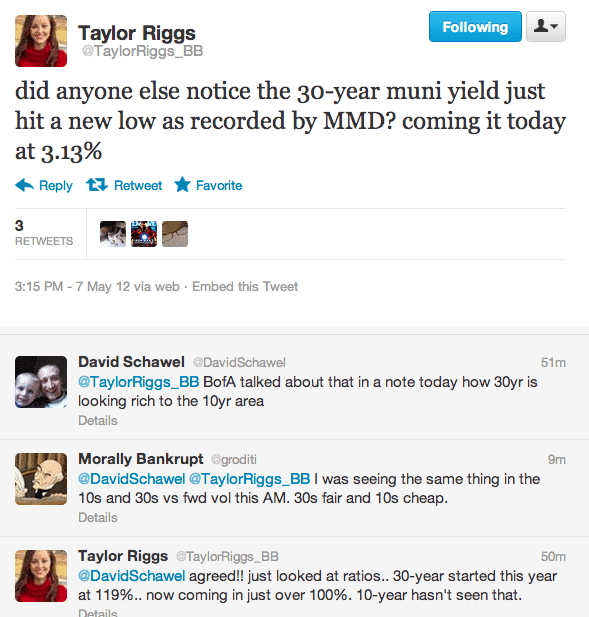