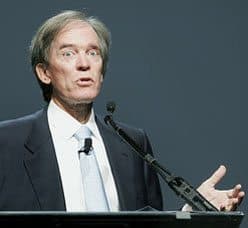 Bill Gross has issued his December investment outlook, in which he has some stark warnings for investors.

Gross, who was nicknamed the “bond king,” before stepping down from Pimco, warns in the letter of what he sees as worrisome economic policy.

Thinking about the Feds broad-based efforts to fight huge debt loads with more debt, Gross wonders if our grandchildren will look at the actions of today’s policymakers and say, “how could they?”

“How could policymakers have allowed so much debt to be created in the first place, and then failed to regulate their own system accordingly? How could they have thought that money printing and debt creation could create wealth instead of just more and more debt? How could fiscal authorities have stood by and attempted to balance budgets as opposed to borrowing cheaply and investing the proceeds in infrastructure and innovation? It has been a nursery rhyme experience for sure, but more than likely without a fairytale ending.”

Gross writes that now, “it is difficult to envision a return to normalcy within my lifetime.”

“Markets are reaching the point of low return and diminishing liquidity,” Gross writes. “Investors may want to begin to take some chips off the table: raise asset quality, reduce duration, and prepare for at least a halt of asset appreciation engineered upon a false central bank premise of artificial yields, QE and the trickling down of faux wealth to the working class.”

Learn Bonds: – Treasuries Rise on Relative Yield Value after ECB Cuts Forecasts. – As the European Central Bank’s decision to delay additional stimulus increased the attractiveness of higher yielding US governmental debt with the potential for fast growth in Europe declining Treasuries rose for a second day.

Charles Schwab: – How Will Falling Oil Prices Affect Municipal Bonds? – Falling oil prices may be a negative for some municipal issuers because of a potential decline in employment and revenues.

Reuters: – U.S. Municipal Bond Issuance to Flatline in 2015. – New borrowing by U.S. states, cities and other parts of the public sector will nearly flatline next year, with issuance of tax-exempt debt likely rising to $275 billion from around $273.5 billion this year, according to a trade group’s survey released on Thursday.

Businessweek: – Municipal Rush to Borrow Seen Repeating Itself. – The biggest calendar of proposed municipal-bond offerings in more than five years may be more than a one-time event, according to John Mousseau, Cumberland Advisors Inc.’s director of fixed income.

ETF Trends: – Muni ETFs Could Maintain Strength Going Into 2015. – The stubbornly low interest rate environment has helped bond exchange traded funds some of the most attractive investments this year. However, with most areas of the fixed-income market fully priced, ETF investors may seek out opportunities in municipal and junk-rated debt.

Jason Draut: – Where TLT Will Go When The FED Raises Rates: It’s Not What You Think. – Long-dated Treasury yields usually converge as the Fed tightens and the 30-year yield is still more than 1% above the 5-year yield. Don’t be afraid to hold Treasurys in the face of rising short-term rates. They provide excellent diversification to an equity portfolio.

Economics Fanatic: – Treasuries Will Remain Attractive Into 2015. – US Treasuries are likely to continue their rally in the first half of 2015 as other developed markets remain unattractive from growth perspective.

Investment Week: – Bond Veteran: ‘I Am Most Nervous About Fixed Income Since 1990’. – Veteran US bond manager Bill Eigen said he has never been so nervous about fixed income markets during his entire career, which spans over three decades.

Morningstar: – Bill Eigen: Bond Funds Will Go Bust. – Successful fixed income investor Bill Eigen quit his job as a long-only bond fund manager because he believes the sector has only one way to go and didn’t want to lose investors’ cash.

Business Insider: – Big Money Investors Have Been Dead Wrong About Bonds For A Decade. – Investors who have been out of fixed income instruments over the last 10 years have missed one of the truly epic risk adjusted rides of the last 100 years.

Barron’s: – Bond Charts Show a Rising Aversion to Risk. – Interpretation of the economic implications of the changing relationships of asset classes is beyond the realm of technical analysis. Still, action in the global bond market is hard to ignore right now with U.S. and many European government bond prices rising while riskier junk-bond prices are falling.

Fortune: – The man Behind the $7.7 Trillion Bond Revolution. – Rick McVey, CEO of electronic trader Marketaxess Holdings, is disrupting the old-fashioned way that Wall Street buys and sells corporate bonds—and cashing in on the change.

Bloomberg: – Junk yields reach 14-month high as investors shun energy. – Investors are fleeing high-yield bonds as the meltdown in the energy industry pushes borrowing costs to the highest level in more than a year.

ETF Trends: – Listening to What Junk Bond ETFs Have to Say. – Some market observers believe high-yield bonds and the related exchange traded funds have the ability to be an important indicator for the equities market.

Businessweek: – Michael Milken on Junk Bonds as Part of the ‘Prosperity Formula’. – Although junk bonds have produced better long-term returns than almost any other asset class, they’re not always the right way to finance a growing company. Success through good times and bad depends on building a strong capital structure that limits risk where business conditions are volatile.

Market Realist: – Why Long-Dated Bonds Underperform When Rates Rise. – What does this mean for bond investors? And what investing resolutions should you make in 2015?

Draghi: Sovereign bonds are eligible instrument the ECB could use in pursuit of its mandate

What wound the yield be on a 5 year treasury issued in euros? Let’s call them hero bonds — Peter Tchir (@TFMkts) December 4, 2014

Tune into the close on @BloombergTV as we hit oil ECB and NFP – is everyone long bonds now?