The Difference Between APR and APY 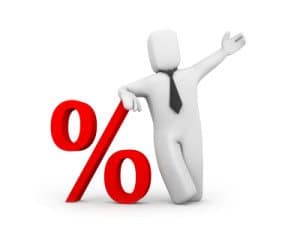 Annual Percentage Return is the easiest of the two to understand because its the simple rate of interest that an account or other type of investment earns.

If the account you are looking at quotes an APR of 2%, then you will earn $2 of interest for every $100 invested, per year.  Because most of these accounts do not make you wait until the end of the year to get the interest earned during the year however, you have the ability to earn “interest on your interest”.  This is where annual percentage yield (APY) comes into play.

Lets say that you open an account for $100, that pays an annual percentage rate of 10%.  This means after 1 year you will have earned $10 as a result of the APR on the account.  If this account only paid interest once a year, then the only thing you would need to take into account when evaluating the rate of return with this account, is the APR.

As most accounts pay out interest multiple times a year however, lets take a look at what happens if you get paid your 10% interest at two points throughout the year, 5% after you have held the account for 6 months, and then 5% at the end of the year:

The second half of the year is where things get interesting.

This also brings the total amount of interest you have earned on your money to $10.25, instead of the $10 you would have gotten if the interest was only paid at the end of the year.  While $.25 does not seem like a lot of money, when we start talking about larger dollar amounts, and longer periods of time, this extra interest on interest can make a huge difference.

The additional $.25 paid in the second half of the year is where the difference between the APR and APY comes into play.