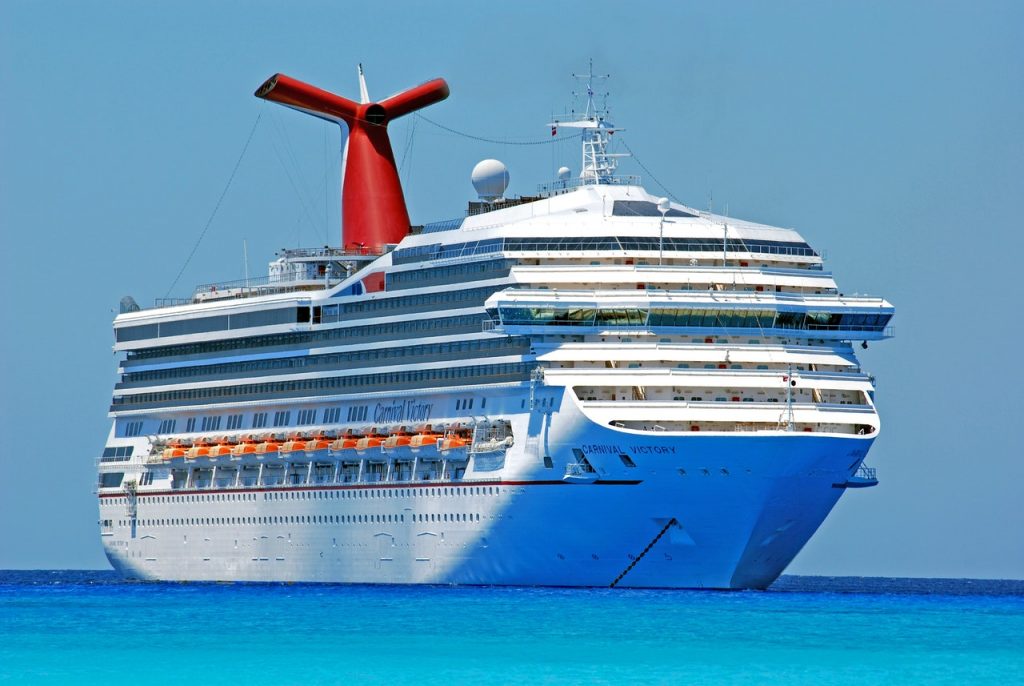 Cruise line stocks like Carnival Corp have whipsawed over the last two years. The sector underperformed by a wide margin in 2020 as cruise line and energy stocks were among the bottom-performing S&P 500 stocks in the year.

However, the vaccine optimism and reopening euphoria ensured a massive rally in cruise stocks in the first half of 2021. The sector was weak in the second half as the omicron wave ravaged the world. What’s the forecast for Carnival Corp stock and is it a buy or sell now?

2020 was a near-death blow for cruise line companies

2020 was a near-death blow for cruise line companies. While the lockdowns meant that their revenues dried up, they still had fixed expenses like employee salaries, interest payments, and other contractual payments to make. Royal Caribbean even posted negative revenues in the third quarter of 2020, which is quite rare for a company. However, the anomaly was due to refunds and cancellations which had to be accounted for in the quarter.

Almost all the cruise companies including Carnival Corp. resorted to the same rule book to survive. They sold shares at a discount, raised more debt, and sold some of the assets to raise cash. While it helped them survive the pandemic it also led to a bloated balance sheet and outstanding share count. While many see a potential in beaten-down cruise stocks citing the drawdown from the pre-pandemic highs, it should be seen in perspective.

To begin with, let’s understand the concept of enterprise value (or EV). While many see a company’s market cap as its “value” in reality the company is owned both by the debt and equity holders. To arrive at the EV we add preferred shares, outstanding debt, and minority interest to the market cap. From this, we need to subtract the cash and cash equivalents.

Looking at the data compiled by Koyfin, Carnival has an EV of $46 billion which is quite similar to its EV before its stock crashed in Q1 2020. So, while the company’s market cap has since dwindled, on the enterprise level it is at similar levels. 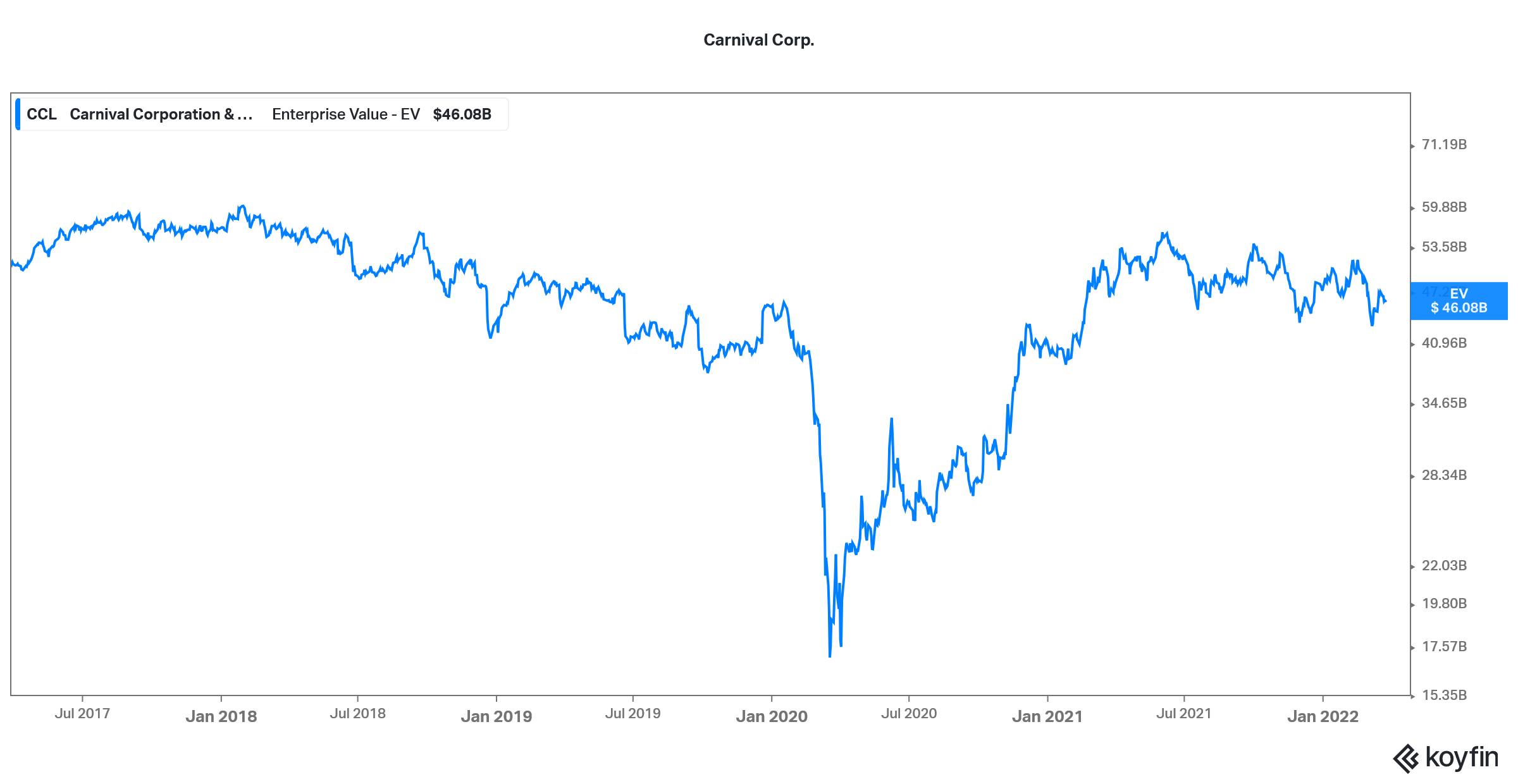 Also, even if we look at the stock price, we need to consider several aspects. Firstly, given the massive dilution over the last two years, Carnival’s per-share earnings would be much lower now on a comparative basis. Secondly, given the massive debt load that the company has taken, its valuations would take a structural hit.

Simply put, believing that Carnival stock would rise to its pre-pandemic levels as and when the business reverts to those levels, might be folly.

Earlier this month, Carnival provided its first-quarter business update. It said that its revenues in the first quarter of the fiscal year 2022 were $1.62 billion which was well short of the $2.26 billion that analysts were expecting. Its net loss of $1.9 billion was also way above the $1.62 billion that analysts were expecting.

The company’s CEO Arnold Donald said, “Despite the impact of Omicron, guests carried grew by nearly 20 percent in the first quarter compared to the prior quarter, while simultaneously increasing revenue per passenger cruise day and driving an improvement in adjusted EBITDA.”

He added, “Given the recent strengthening in booking volumes coupled with the closer-in booking patterns, we expect an extended wave season. In fact, we gained occupancy even in the month of March with fleetwide occupancy nearing 70 percent and several sailings already exceeding 100 percent.”

The company sounded bullish on its outlook and said that its weekly booking volumes are the highest since its services resumed. It also expects to become adjusted EBITDA positive in the back half of the year.

Donald also added, “We believe we have positioned the company well to withstand volatility on our path to profitability and have been working hard to resume operations as a stronger and more sustainable operating company, to maximize cash generation and to deliver double digit returns on invested capital over time.”

Of the 21 analysts covering Carnival stock, only seven have a buy rating while four have a sell rating. The remaining 10 analysts have rated the stock as a hold or some equivalent. Its median target price of $21.57 is a 17.3% premium over current prices.

On Friday, Argus downgraded the stock to hold from buy. Analyst John Staszak said in his note “We think that Carnival’s prospects have deteriorated amid the slow recovery from the Omicron surge and rapidly rising fuel costs.” The brokerage also lowered the company’s earnings forecasts and now expects it to post a per-share loss of 8 cents in the year. Even for the fiscal year 2023, it lowered the EPS estimate to $1 from $1.20.

Notably, rising fuel costs, rising cases of the omicron variant, and costs related to restarting its operations fully are the three key headwinds that Carnival faces.

Global crude oil prices have spiked after Russia’s invasion of Ukraine. Crude oil prices jumped to their highest level since 2008 earlier this month before paring some gains. The forecast for oil prices looks bullish in the near term. While higher oil prices would mean bumper earnings for oil and gas producers, cruise and airline companies would see an escalation in their input costs.

Should you buy or sell Carnival stock?

Carnival stock trades at an NTM (next-12 months) EV-to-sales multiple of 2.5x which is above what it did before the pandemic. There are two opposing factors at play in the company’s valuation. Firstly, its revenues are currently below the pre-pandemic levels so the valuations might appear high. However, given the steep rise in its debt, the company might not be able to command pre-pandemic multiples once its business reverts to full normalcy.

Overall, at these price points, Carnival stock does not look like a buy. Given the fall in some of the other fundamentally strong companies, investors might be better off scouting for opportunities elsewhere.

How to invest in stocks?

You can invest in stocks through any of the reputed online stockbrokers. Alternatively, if you wish to trade derivatives, we also have reviewed a list of derivative brokers you can consider.

An alternative approach could be to invest in ETFs especially if you are not too well versed with investing or lack the time to identify individual stocks.