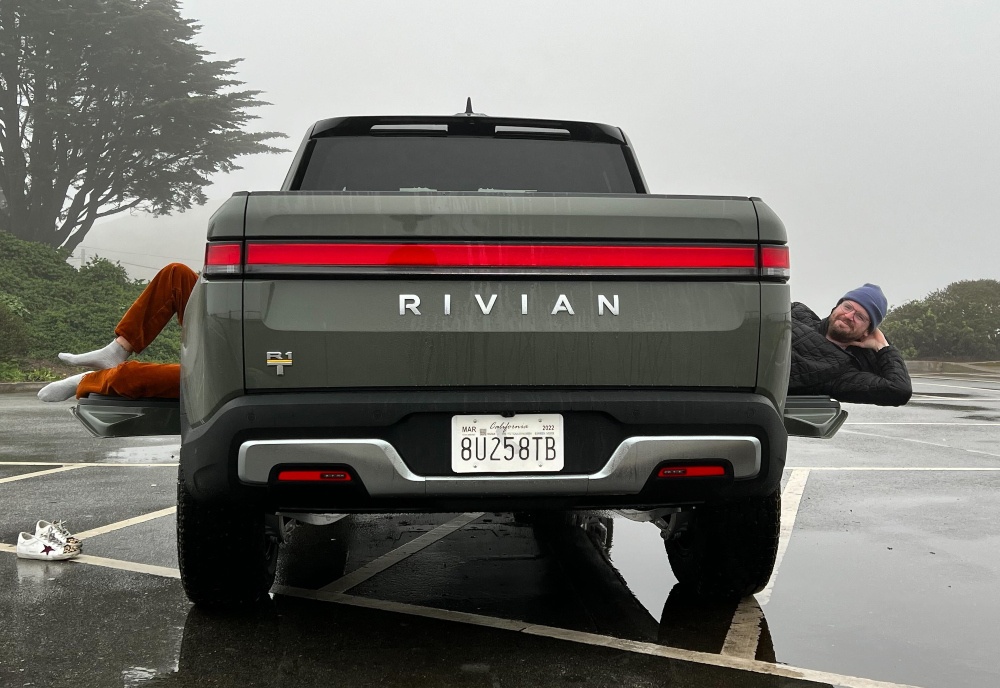 Rivian stock is trading lower in early price action today and is not far away from its 52-week lows. While US stock markets have recouped some of their losses, RIVN stock continues to look weak. What’s the forecast for Rivian stock and should you buy the dip?

Rivian was the biggest IPO of 2021 and overall, the largest since Facebook’s 2014 debut. The company, which is backed by Amazon and Ford, priced the IPO at $78 per share, which was above the initial range. The company’s valuation had baffled investors as it was asking for a market cap of $77 billion. RIVN ended up raising almost $12 billion from the offering which it would use for expansion.

Rivian’s IPO was reminiscent of the bubble in the EV industry. At its peak, RIVN’s market cap surpassed $150 billion. While many saw it as reasonable and compared it with Tesla’s over $1 trillion market cap, many failed to digest the fact that a startup EV company with negligible revenues could command such valuations.

The surge in RIVN’s stock price led to a rally in other EV stocks as well. The industry has anyways been working on a derivative valuation model where analysts value startup companies based on Tesla’s valuation. As RIVN’s valuations surged, stock prices of other EV names like Tesla and Lucid Motors also went up. Incidentally, Lucid Motors had also gone public in 2021 only but unlike Rivian which opted for a traditional IPO, Lucid went public through a SPAC reverse merger.

RIVN stock trades well below the IPO price and has lost over two-thirds of its market cap from the peak. While other EV stocks have also crashed, the fall in Rivian is the most severe among major names. Along with the general sell-off in growth companies, some company-specific factors have also been at play.

In the earnings release earlier this week, Lordstown Motors said that it expects to produce only about 500 vehicles in 2022 and only 2,500 vehicles in 2023. The company’s guidance is less than a tenth of the 32,000 deliveries that it had originally forecast in its first full year of operation.

To be sure, Lordstown is not the only company battling production issues and Nikola also faced them. Incidentally, Hindenburg Research had also accused Nikola of fabricating the order book which eventually led to the exit of its founder Trevor Milton.

Lucid Motors has also slashed its 2022 production guidance citing parts shortage. Over the next couple of years, more EV companies might need to revise their aggressive production targets. 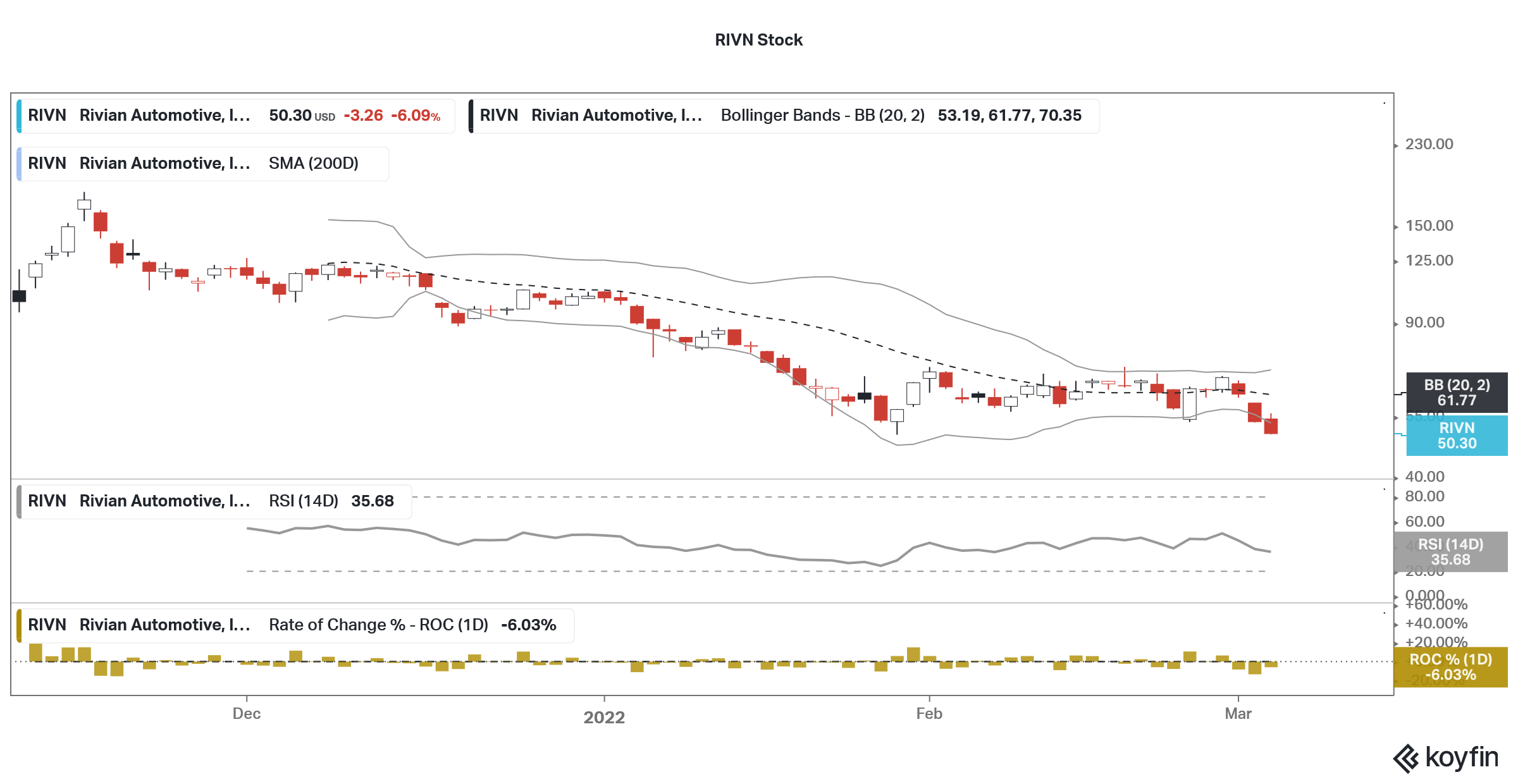 Why has Rivian stock plunged?

Company-specific factors are at play in the crash in Rivian stock also. While the company did not talk about any production issues, it said that it would need to raise vehicle prices by as much as 20% in some cases. Also, these might impact those buyers who have already made their reservations.

In its email to Barron’s, RIVN said “Like most manufacturers, Rivian is being confronted with inflationary pressure, increasing component costs, and unprecedented supply-chain shortages and delays for parts, including semiconductor chips.” It added, “This rise in cost and complexity due to these challenging circumstances necessitate an increase to the prices of the R1T and R1S models we offer today, prices which were originally set in 2018.”

Tesla’s CEO Elon Musk, who had mocked Rivian’s valuation previously also, and even talked about offloading Tesla shares just when Rivian was going public, has again taken a swipe at the company. Musk said in a tweet that RIVN would post massive gross loss margins.

Here it is worth noting that automakers across the world have been raising prices. Even Tesla had raised car prices multiple times last year to offset cost pressures. There has been cost-push inflation for automakers with prices of key raw materials like steel, copper, and aluminum rising. Steel prices are in the US rose to a record in 2021 highs while global copper prices also rose to a new record, breaching the previous record that they had hit in 2011. Also, as gas prices have risen, logistics costs have also gone up.

Wall Street analysts have been apprehensive about Rivian’s valuations. Earlier this week, Wells Fargo reiterated RIVN stock as an equal weight while lowering its target price from $110 to $70. It said, “We are bullish on the products & brand strategy; however, we see near-term headwinds including risk to Q1 delivery expectations, the negative impact from rising interest rates, increased BEV competition, and potential selling post the lockup expiration in mid May.”

Morgan Stanley, which is among the most vocal Tesla bulls on the street, is also bullish on RIVN while bearish on Lucid Motors. Last month, commenting on LCID and RIVN, it said, “An investment in either company requires a need for long-term thinking and preparation for significant potential volatility around the ramp to high volume manufacturing.” However, it said that its survey shows that investors prefer Rivian over Lucid.

However, many others are worried about the valuations. Last year, JPMorgan initiated RIVN stock as a neutral. It said, “Our Neutral rating balances — on the one hand — extremely compelling top-line growth prospects, surprisingly world class products for a new manufacturer, and structural industry tailwinds, with — on the other hand — equally heavy investments anticipated to fund that growth and valuation which is clearly already pricing in a lot.” Goldman Sachs also reiterated similar views and called the stock fully valued.

In Q4 2021, both Amazon and Ford had reported billions of dollars of gains on their Rivian investment. Now, both these companies might have to report massive losses on the unrealized losses on the investment.

As for investors, the general mood is quite bearish towards loss-making growth companies. Like fellow EV companies, RIVN might also face the proverbial moment of truth as it scales up deliveries and sets up new plants. While it is customary to compare every startup EV company with Tesla, the Elon Musk-run company has managed to prove its mettle against all odds. Not all EV companies might be able to repeat the magic as is quite evident over the last year.

How to invest in Rivian stock?

You can invest in Rivian stock through any of the reputed online stockbrokers. Alternatively, if you wish to trade derivatives, we also have reviewed a list of derivative brokers you can consider.