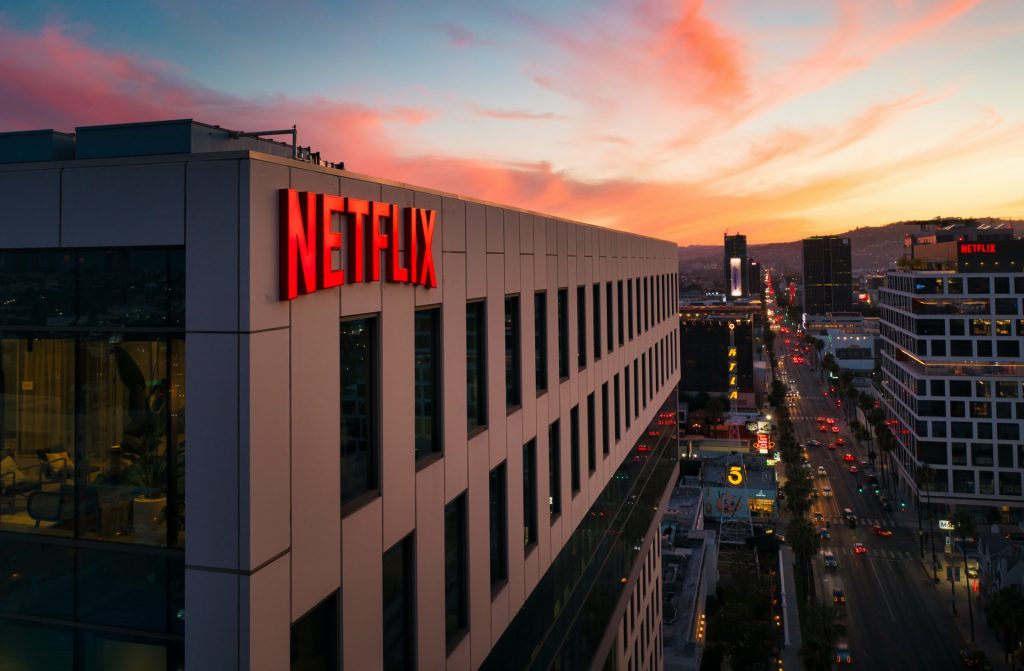 Last week, Netflix released its fourth-quarter earnings which led to a bloodbath in the stock. NFLX fell 21.8% on Friday to hit a new 52-week low. The stock is now trading at levels where it traded before the COVID-19 pandemic.

Netflix was the first FAANG name to report its earnings. It was a bad omen for tech companies that were anyways under pressure amid rising bond yields. Looking at Netflix’s fourth-quarter earnings, it reported revenues of $7.71 billion in the quarter, which were in line with estimates. In the full year, the streaming giant reported revenues of $30 billion, 19% higher than what it did in 2020.

The company’s adjusted EPS of $1.33 was also ahead of the $0.82 that analysts were expecting. Its net subscriber adds in the quarter were 8.28 million, which was also slightly ahead of estimates. Netflix ended the quarter with 222 million net paying subscribers globally.

While Netflix’s earnings in the fourth quarter looked decent, it was the first-quarter guidance that spooked investors. The company expects to add 2.5 million subscribers in the first quarter, which was way below what analysts were expecting. To make things worse, it said that it does not expect its margins to expand in 2022. Amid the increasing competition in streaming, NFLX has had to increase the investment towards new content, which is taking a toll on the margins.

In the past, Netflix has denied competitive pressure. On the contrary, it said that more players entering the industry were a sign that the industry holds long term promise. While the company continues to be bullish on the long-term outlook for streaming, it alluded to increasing competition.

It said, “Consumers have always had many choices when it comes to their entertainment time – competition that has only intensified over the last 24 months as entertainment companies all around the world develop their own streaming offering.” NFLX added, “While this added competition may be affecting our marginal growth some, we continue to grow in every country and region in which these new streaming alternatives have launched.” 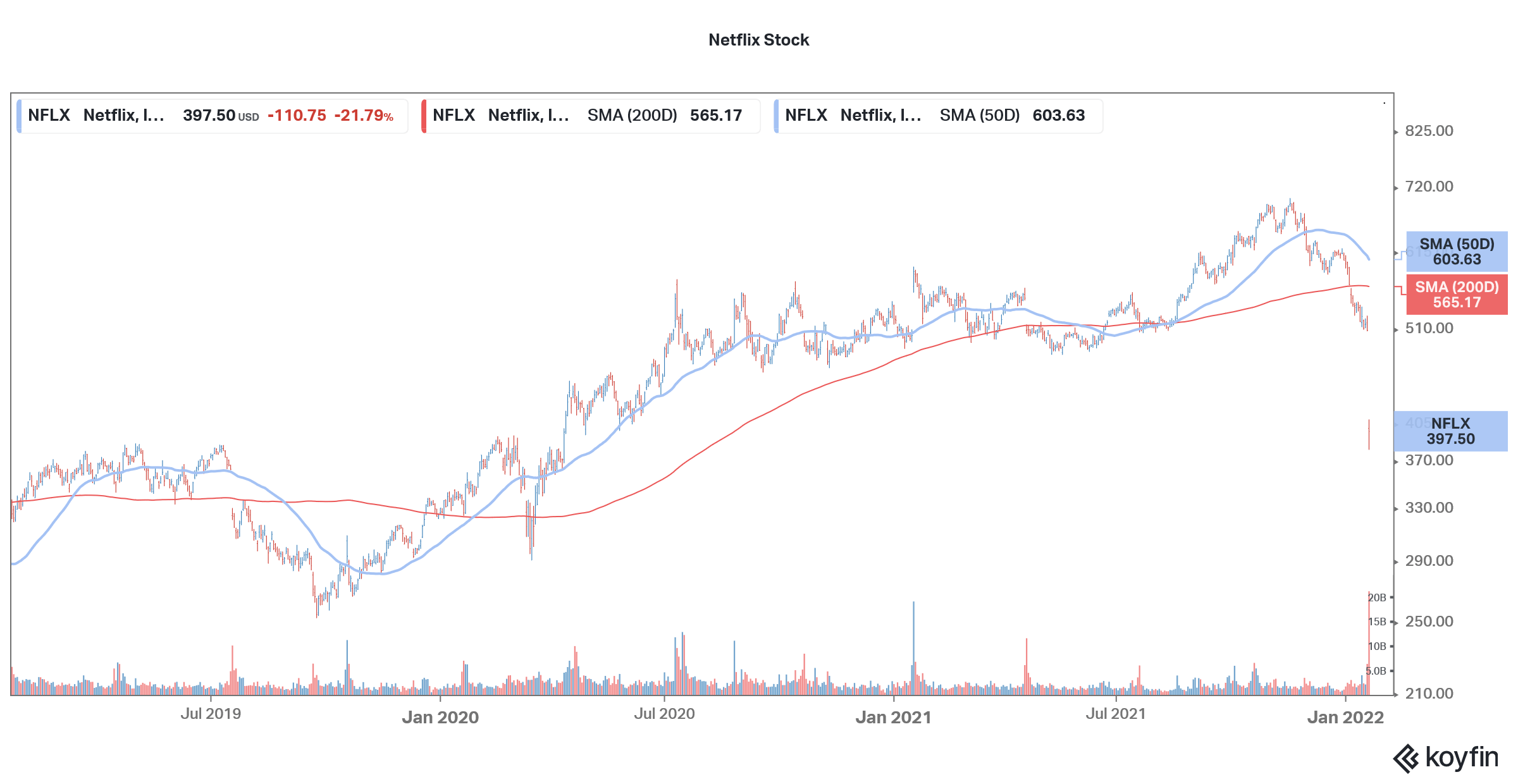 Meanwhile, after Netflix’s earnings report, there was a flurry of downgrades. Morgan Stanley downgraded the stock from overweight to equal weight while lowering the target price from $700 to $450.

“The 1Q22 guidance implies this ramp in content is not translating into the 20-25 [million] net adds we have underwritten historically. Engagement is growing, churn is declining, and Netflix clearly has pricing power as evidenced by its recent 10%+ US price increase. However, bringing that incremental new member to the service is proving more challenging than we anticipated,” said Morgan Stanley in its note.

Barclays and Evercore ISI also downgraded NFLX stock after the earnings release. According to Barclays “Based on historical Q1 contribution to full-year growth, the company’s guidance in essence implies net adds in ’22 coming in even lower than ’21, which was impacted by Covid comps.”

MoffettNathanson analyst Michael Nathanson sees Netflix’s slowing growth as a negative for the entire streaming industry. Baird, Credit Suisse, Macquarie, and KeyBanc were some of the other brokerages that downgraded Netflix after the earnings.

Some analysts see light at the end of the tunnel

Meanwhile, some analysts see the light at the end of the tunnel. For instance, while JPMorgan lowered its target price from $725 to $605, it maintained its overweight rating. “The biggest question coming out of NFLX earnings is whether the outlook is thesis changing. It may be on a near-term basis — NFLX will be in the penalty box. But we don’t believe it’s thesis-changing long-term or that there’s a structural shift to the NFLX story,” said JPMorgan analyst Doug Anmuth.

LightShed Partners’ Rich Greenfield also pointed to the long-term growth trajectory for Netflix amid the continued growth in streaming. Bank of America also maintained its overweight rating and said that markets would now start focusing more on profitability and international expansion rather than quarterly subscriber numbers.

Benchmark analyst Matthew Harrigan upgraded the stock from a sell to hold, the rare upgrade after the earnings. According to Harrigan, “Netflix stock should find a floor as the $405 after market price discounts both member growth deceleration and margin underachievement.”

In the short term, Netflix stock might continue to remain under pressure. Markets have repriced the stock for slower growth and a rerating looks unlikely in the short term, especially amid the rising interest rates.

However, over the medium to long term, Netflix should see good growth. The company has among the highest average plan prices and it has demonstrated its pricing power with the recent price hikes in the US. Also, gaming could be the next key growth driver for the company.

But, for now, NFLX stock might continue to remain weak as investors are apprehensive of slowing growth despite higher investment in new content.

You can trade in Netflix stock through any of the reputed online stockbrokers. Alternatively, if you wish to trade derivatives, we also have reviewed a list of derivative brokers you can consider.