Nucor, the largest US-based steel company, would release its earnings later this week. What should you expect from the company’s earnings release and what’s the forecast for the stock?

It later also acquired the US assets of global steel giant ArcelorMittal. Meanwhile, while steel names have come off their 2021 highs, they are still up sharply for the year. With a year-to-date gain of 91.4%, Nucor is among the top 10 gainers in the S&P 500 Index. It happens to be the only steel company in the prestigious index.

Analysts polled by TIKR expect Nucor to report revenues of $10.2 billion in the quarter, a year-over-year rise of 108%. Its adjusted EPS is expected to rise to $7.42 in the quarter. The company had posted a loss in the third quarter of 2020. Nucor provided a third-quarter EPS guidance of $7.30-$7.40. This would mean another record quarter for the steel giant. It had posted record profits in the second quarter also.

US steel prices are at record levels. Along with the strong demand environment in the US, the 25% tariffs imposed by President Trump are also helping US steel prices. While many expected President Joe Biden to ease the tariffs, so far the administration hasn’t tinkered with them.

Nucor is on an acquisition spree

Nucor has been on an expansion and acquisition spree. The company anyways had among the best balance sheets in the steel industry, and the recent surge in earnings has only strengthened its balance sheet further. The company has returned $2 billion as dividends and repurchases to stockholders in 2021. Notably, while the steel industry is notorious for volatile earnings, Nucor has managed to increase its dividend progressively over the years.

Nucor has a rich history of investing in new plants across the business cycles. Earlier this month, it announced that it would set up a 3 million ton per annual steel sheet plant at a cost of $2.7 billion. The construction is expected to be completed in two years after the necessary approvals are obtained. It would have hot-rolled, cold-rolled, as well as galvanizing lines. The plant would initially have two galvanizing lines but intends to increase them in the future.

Notably, US steel companies increased their investments in new plants after Trump’s steel tariffs. Steel Dynamics also doubled down on new plants after the tariffs. While these investments would help increase the country’s steel capacity and reduce the dependence on imports, it has also raised overcapacity concerns. In 2019, Bank of America Merrill Lynch had famously termed the situation “Steelmaggedon.” However, it also said that the US steel industry would become more efficient with the addition of new capacity, and companies like Nucor and Steel Dynamics would be the beneficiaries. 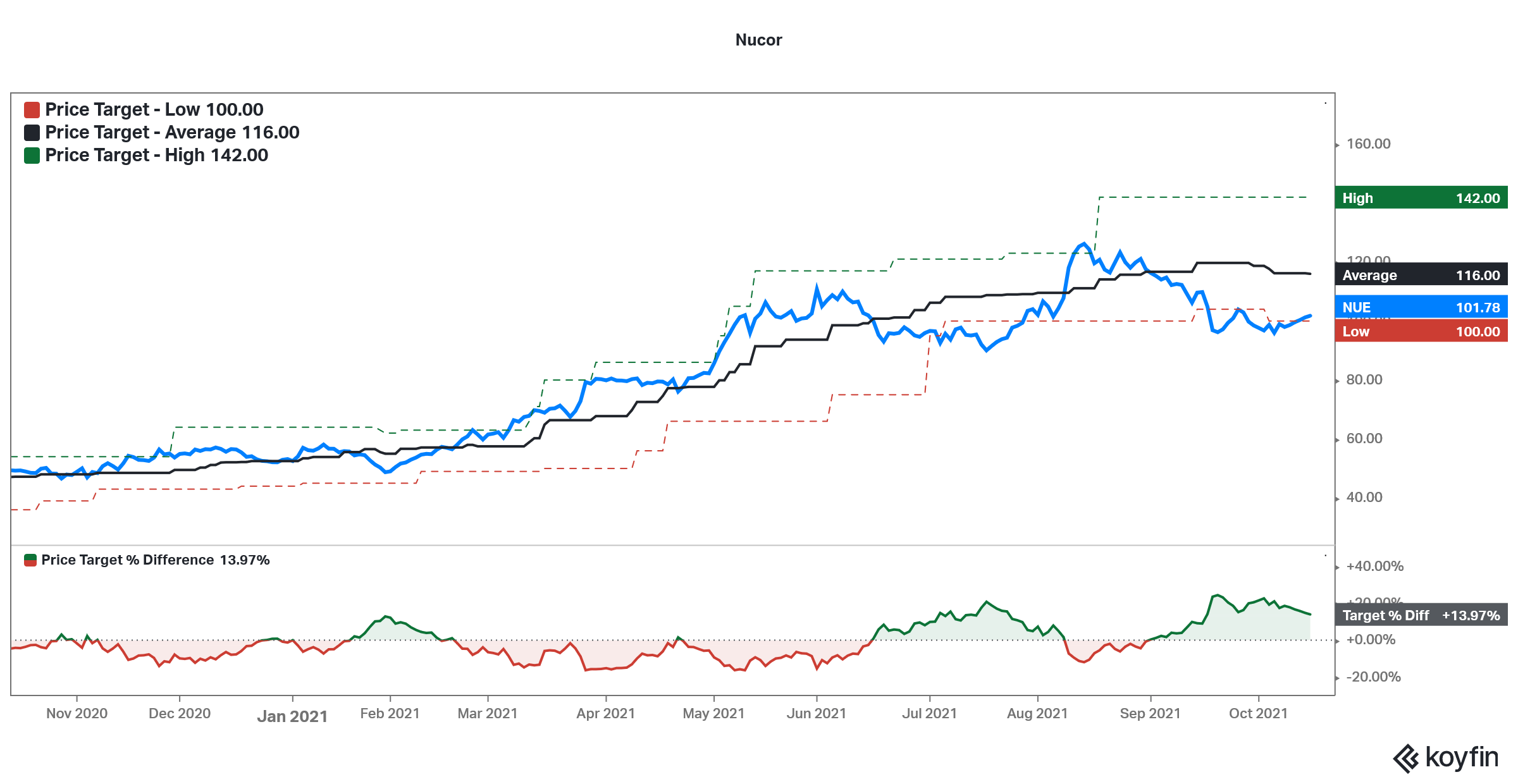 Meanwhile, some analysts have been taking a bearish view of US steel stocks amid signs that prices have peaked and would come down next year. Goldman Sachs analyst Emily Chieng recently downgraded Nucor from a buy to neutral expressing concerns over the sustainability of US steel prices.

Chieng expects US steel prices to come down as imports become attractive and new capacity in the US comes online. To be sure, new capacity in the US would add to the supply and put some pressure on prices. However, there has also been a lot of consolidation in the industry and closure of some of the older plants.

Commenting on Nucor Chieng said “Our positive view was driven by rising HRC prices driving margin expansion, the company’s financial strength which has underpinned both a strong capital returns program, and capacity for growth to further drive margin expansion in periods of normalized steel prices. While our positive view on these drivers has not changed, we see them as better reflected in the current stock price.”

Meanwhile, Jim Cramer still likes Nucor stock despite the downgrade from Goldman Sachs. He advised buying the stock after the prices fell on Goldman’s downgrade. “Nucor’s a world-class American manufacturer that rarely gets put on sale — do not look a gift horse in the mouth,” said Cramer.

Commenting on the downgrade, Cramer said, “It’s just that what I think they’re wrong about [is] the decline is not going to happen the way they think. —There are many reasons why steel prices could remain completely resilient.” He also pointed to strong steel demand in the US and also said that the infrastructure bill would help propel US steel demand even higher.

Nucor has high exposure to steel products used in the non-residential industry. This coupled with an increasing production profile makes Nucor a good way to play the infrastructure bill.

Wall Street meanwhile is divided on Nucor stock. It has four buys and eight hold ratings. However, none of the analysts rate the stock as a sell. Its average target price of $116 implies an upside of almost 14% over the next 12 months. From a valuation perspective, the stock would appear cheap with an NTM (next-12 months) PE of only about 3.9x. That said, the valuations for cyclical companies are lowest at the peak.

Should you buy Nucor stock

Overall, while US steel prices might have peaked, Nucor still looks like a good buy. The company’s expansion spree would help it further increase the market share in the US markets. The company’s strong balance sheet, higher and stable profit margins, make it an attractive bet in otherwise volatile steel industry.

You can buy Nucor stock through any of the reputed online stockbrokers. Alternatively, if you wish to trade derivatives, we also have reviewed a list of derivative brokers you can consider.