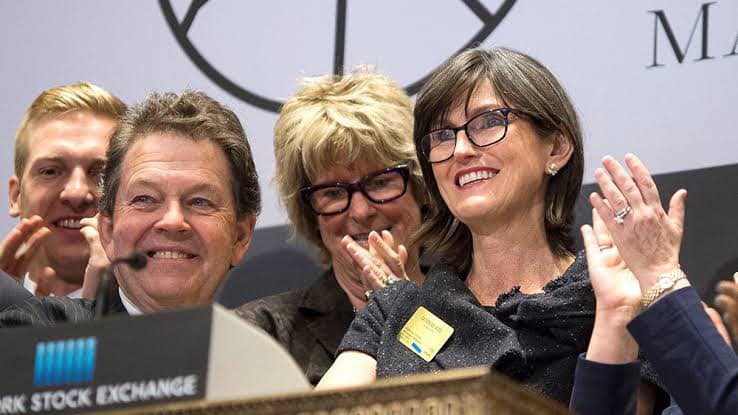 Cathie Wood’s flagship ETF the ARK Innovation ETF (ARKK) is having a tough ride and hit a 52-week low in today’s price action. The ETF has underperformed the markets by a wide margin in 2022 as growth stocks have tumbled on rate hike concerns.

ARKK is now down 57% from its 52-week highs. What’s the forecast for the ETF and should you buy or sell now?

Tesla is the top holding for ARKK, as it has been for quite some time. Teladoc Health, Roku, Zoom Video Communications, and Coinbase are the other top four holdings. While Tesla stock is still positive over the last year, all other top holdings have tumbled. Teladoc Health, Zoom, and Roku hit a new 52-week low today. Roku is among the worst-performing stock today and has lost a quarter of its market cap. The slump in its holdings is also reflected in ARKK’s price today.

Tesla has been a savior

So far, Tesla was a savior for ARKK as the stock was the best performing stock in the portfolio. However, the stock has also been under pressure which only gained steam after its fourth-quarter earnings. While the financial performance was better than expected in the quarter, Tesla said that it would delay the launch of new vehicles including the Cybertruck to 2023 amid the chip shortage.

Here it is worth noting that while ARKK has sold some Tesla shares to limit the portfolio exposure to a single stock, Wood continues to remain bullish on the EV (electric stock) and under her base case scenario expects the stock to rise to $3,000 by 2025. This would mean the stock tripling from here and commanding a market cap of around $3 trillion. Gene Munster is also bullish on Tesla and expects its market cap to rise to $2 trillion by 2023. Tesla forms 8.7% of ARKK’s portfolio and its price action impacts the ETF significantly.

ARKK has been buying falling knives

Known to back the companies, Wood has been buying more of the stocks. Meanwhile, while many believe that her funds have scope to fall more, Wood says that her names are not in a bubble. “We are not in a bubble. Our strategies would be flying if we were. I think we have not begun rewarding innovation for what’s about to happen and so that’s where our conviction comes from,” said Wood speaking with CNBC last year.

She added that the benchmark stocks are in a bubble instead. “The other side of [disruptive innovation] is creative destruction, and we do believe that traditional benchmarks are where that’s going to take place.” Meanwhile, despite Wood’s faith in ARKK holdings, they have continued to plummet.

Wood believes innovation is on a sale

Even as ARKK continues to make new lows, Wood is bullish on the long-term potential. She said, “We do believe innovation is in the bargain basement territory. … Our technology stocks are way undervalued relative to their potential. … Give us five years, we’re running a deep value portfolio.”

She reiterated her previous views that benchmark stocks are in a bubble and riskier to invest in, unlike her names which are disruptive companies. “If we are right and the disruptive innovation that is evolving is going to disintermediate and disrupt the traditional world order, those benchmarks are where the risk is. Not our portfolios,” said Wood. 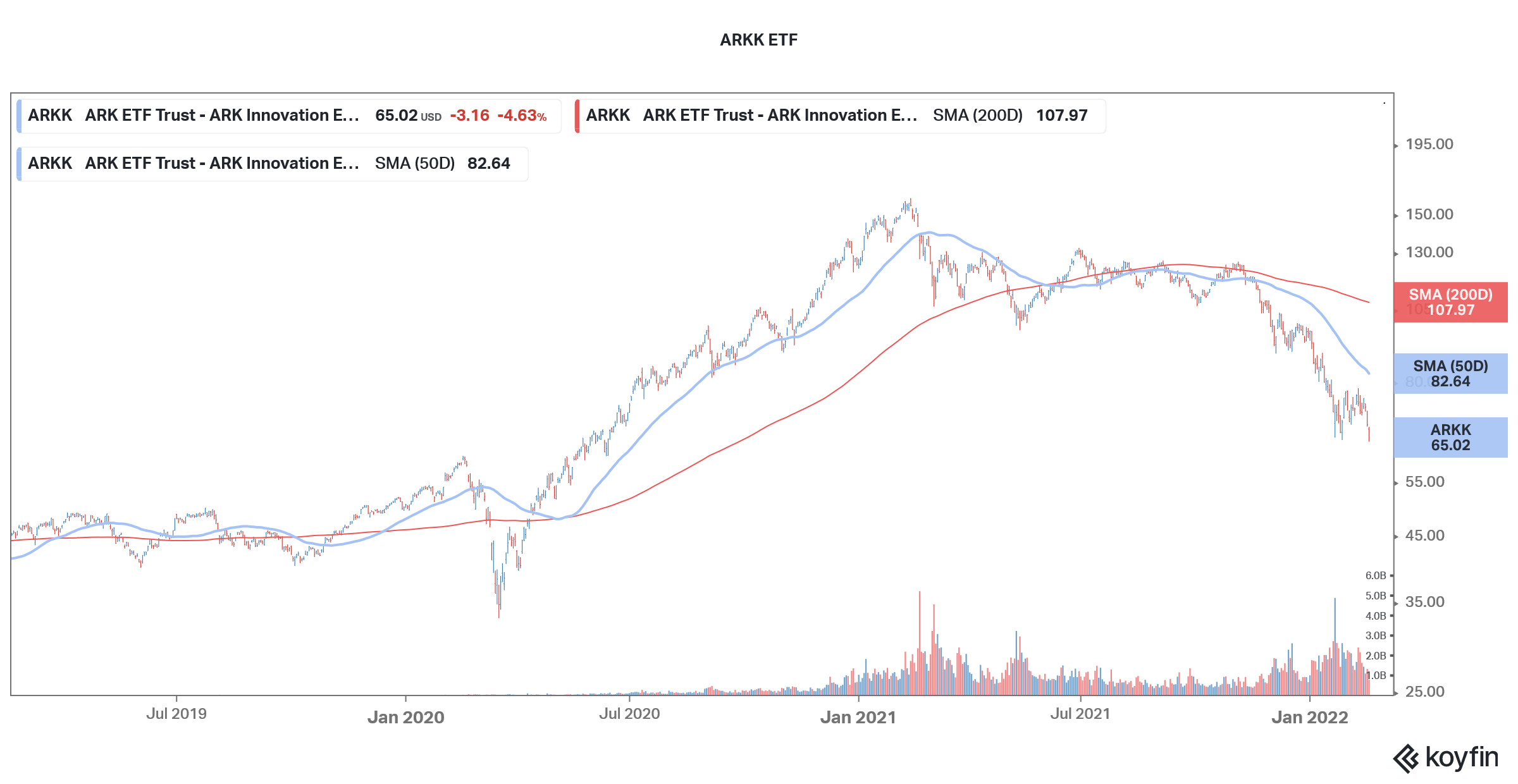 Jessica Rabe, co-founder of DataTrek Research believes that ARKK might fall more and compared its performance with the crash in tech stocks during the dot com bubble. Rabe said, “ARKK has broadly tracked the Nasdaq’s 2000/early 2001 experience.” She added, “If the 2000/2001 analog continues, we can expect ARKK to continue trending lower over the next three weeks.”

According to Rabe, “ARKK has broadly tracked the Nasdaq’s 2000/early 2001 experience,” Rabe said. “If the 2000/2001 analog continues, we can expect ARKK to continue trending lower over the next three weeks.”

Disruptive growth stocks that ARKK and other Wood ETFs hold have been under pressure this year. These stocks have fallen due to multiple reasons. These include slowing growth, tightening by the Fed, and overvaluation. Notably, the valuations of some of the Wood stocks got a way too ahead of fundamentals.

As things stand now, the worst seems to be nearly over for ARKK and other Wood ETFs. Some of her stocks now look attractive, especially from a long-term perspective. If you can brace short-term volatility and want exposure to innovative companies and disruptors, you can start accumulating ARKK at these price levels.

How to invest in ARKK ETF?

Usually, ETFs are passive investment vehicles that have low fees. For instance, some of the ETFs tracking the S&P 500 have an annual fee as low as 3 basis points. However, Wood’s ETFs have a higher expense ratio. ARKK is an actively managed ETF with an annual expense ratio of 75 basis points.

That said, if you want to take exposure to beaten-down disruptive growth names, ARKK looks a good bet. It would be prudent to do staggered buying in the ETF as it might fall more amid the continued slump in its constituents. However, if you are a long-term investor, ARKK could be a good bet.

Conversely, if you believe that ARKK has scope to fall more and the bottom is yet far away, you can buy Turtle Capital Short Innovation ETF that trades under the ticker symbol SARK. While Wood cautions not to bet against innovation, SARK has seen net inflows in excess of $200 million in 2022 reflecting the pessimism towards Wood’s ARKK.